Santander is an elegant city which extends over a wide bay with views of the Cantabrian Sea. Its historic quarter includes a group of majestic buildings which are situated against an incredible natural backdrop of sea and mountains. Its marine and commercial tradition is linked to a century old history of tourism, which has its main attractions in the famous El Sardinero beach, the promenade and the La Magdalena peninsula. The cultural wealth of the Cantabrian capital is enriched with the passage of the Pilgrim’s Road to Santiago de Compostela and the neighbouring Altamira Caves, both of which have been declared World Heritage.

Santander is a city in which the mixture of its various vocations, seafaring, commercial and tourism traditions, remains patent. The city’s origin is related to the Portus Victoriae founded by the Romans. However, the capital’s urban development was not to come about until the XI c. when the town began to grow around the San Emeterio abbey. From its Latin name, Sancti Emeterii, comes the current name of Santander. During the XVIII and XIX centuries, the city became a key trading port for the maritime routes between Castile and the American colonies. From around the middle of the XIX century, Santander became one of the most exclusive summer tourist destinations on the northern coast of the Iberian peninsula. The Paseo de Pereda, with its typical houses with miradors, and its gardens constitutes a lively boulevard which separates the coastal strip from the historic quarter of Santander. 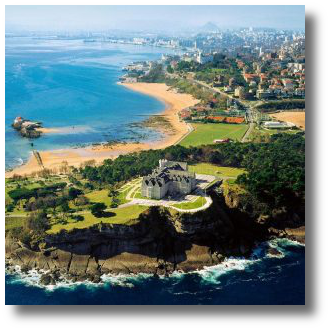 The nearby Cathedral is one of the oldest buildings in the capital, its earliest construction dating from the XIII c. Inside you can see the tomb of Marcelino Menéndez Pelayo, a work by the sculptor Victorio Macho. Under the main chapel is the crypt of El Cristo, a sombre vaulted chamber in which various traces of the Roman era were discovered.Opposite the cathedral is the Plaza Porticada, in Neoherreran style surrounded by several public buildings. You find yourself at a major crossroads of lively commercial streets such as Arrabal or el Cubo. One of these streets leads to the plaza del Generalísimo, site of the Town Hall, next to the popular market of la Esperanza, in the modernist style. Your visit has to continue through the Fine Arts Museum and the Menéndez Pelayo Stately Home, a building which has been declared an Historic-Artistic Site. The Port and El Sardinero returning to the Pereda gardens, you can see the Santander Bank and the small palace of El Embarcadero, a building with excellent views over the bay. Here you will find the fishing port and the Puerto Chico, as well as several maritime installations: the exchange, the harbour, the Naval Command, etc.In this place you can see one of the most typical Santander scenes. Added to the image of mansions and bourgeois buildings overlooking the bay is that of other buildings of a cultural nature. Among them is the Festival Palace, built by Francisco Javier Sáenz de Oiza and the current site of the prestigious Santander International Festival. The Museum of Prehistory and Archaeology, which includes various prehistoric finds, among which are its Paleolithic collection, one of the most valuable in Europe. 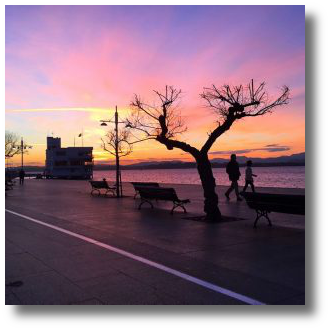 Finally, the Cantabrian Maritime Museum, one of the most complete museums in Spain dedicated to the sea, discovers various aspects related to the Cantabrian Sea: marine biology, maritime history, fishing ethnography, etc.From this point Santander display the beautiful beaches of los Peligros, la Magdalena and Biquinis, with calm waters protected from the wind by the bay.In the part of Santander where there is most tourism is El Sardinero. Opposite this famous beach you can enjoy one of the most beautiful promenades in Spain, with magnificent buildings such as the Gran Casino, which evokes the architecture of the Belle Époque. The Plaza de Italia, with its elegant, lively summer terraces, and the Piquío Gardens, which are situated on a rocky inlet marking the separation between the two beaches of El Sardinero, complete the picture.Between the historic quarter and El Sardinero is the peninsula on which the la Magdalena Park and the royal palace are sited, the latter being inaugurated in 1913 as the summer residence of King Alfonso XIII.

The residence, which is English in style, has excellent stables and is surrounded by extensive gardens and wooded areas. This privileged area for relaxation becomes during the summer months the nerve centre for the famous summer courses of the International Menéndez Pelayo University, a forum which brings together both students and the most outstanding figures in the most varied fields of knowledge. Gastronomy and the Outskirts situated halfway between the sea and the mountains, Santander has a particular mixture of ingredients in its gastronomy. From the sea come the characteristic rabas (fried squid), bocartes rebozados (breaded whitebait), and fresh shellfish. The interior provides excellent beef and a dish which is emblematic of the entire region, cocido montañés (a stew made of beans, meat and cabbage). Desserts includes quesada (cheesecake) and sobaos pasiegos (sponge cakes made with butter, flour and eggs). Nature lovers will find in Cantabria an impressive wealth of protected areas. Among the best conserved areas figure the Natural Parks of Oyambre, Peña Cabarga and Saja-Besaya, although the largest is the Picos de Europa National Park, which shares its territory with Asturias and Castilla y León. In the foothills of this mountain range is the Parador de Fuente Dé. Among the many accommodation options there is also the Parador Gil Blas, in Santillana del Mar, declared a National Monument. Near the capital, you can enjoy the Cabárceno Nature Park, an area of great natural beauty where various species of animals live almost in the wild. The traditional northern route of the Pilgrim’s Route to Santiago de Compostela runs along the Cantabrian coast, crossing picturesque towns such as Castro Urdiales, Santoña, Suances, Comillas, San Vicente de la Barquera or Santillana del Mar. A few kilometres from this town are the Altamira Caves, which have been declared World Heritage. Considered the “Sistine Chapel of Paleolithic Art”, they contain some of the most important cave paintings of Quaternary art. A modern building houses the Museum, where the new cave can be seen, a true replica of the pictures which appear in the original cave.